(Natural News) Life isn’t good these days for Bill and Hillary Clinton, though “good” can be a subjective term.

If you’re a millionaire, live in an upscale New York home, and are still breathing free air because the Deep State has protected you from being prosecuted on several occasions for obvious commissions of crimes, life is good.

But Bill and Hill aren’t at the top of the political heap anymore. They’re not king and queen dog of the Democrat Party. They’re not loved and adored by throngs of fans and supporters anymore, despite the false impression of popularity projected by the “establishment” media.

And that’s what is making life so bad for the Clintons. They’re used to being adored.

For some reason known only to them, the former first couple decided to launch an international 13-city speaking tour in late November that began in Toronto. But even in Left-leaning Canada, they could only draw a crowd of 3,000 — in a 19,000-seat venue. (Related: Former federal prosecutor: ‘Ample evidence’ to investigate Clintons for corruption; no special counsel needed.)

“Why they think anyone in Canada wants to hear them whine about Hillary’s crushing defeat in the 2016 presidential election is anybody’s guess,” writes Joseph Curl at The Daily Wire.

They then took their show, “An Evening With The Clintons,” to Montreal. But alas, they didn’t pull much better there, either. They tried, though, via pandering. Both claimed that Canada was a superior country to America — despite our global leadership, No. 1 economy, and superpower status.

But it just kept getting worse from there, Curl notes:

Ticket prices for their event in Texas plunged to just $6. Seems no one is interested in hearing them tell “stories and inspiring anecdotes that shaped their historic careers in public service, while also discussing issues of the day and looking toward the future,” which a press release promised.

So what’s the deal? Why put themselves through this angst? Curl says it can’t be for the dough; they’ve raked in $250 million since Bubba Bill emerged from the White House nearly impeached but otherwise broke and unscathed (and let’s not forget the millions Hill made via their “foundation” selling favors to foreign governments while serving as Obama’s secretary of state).

They just want folks to love them. Adore them. Fawn over them. Aspire to be them. Pledge their undying support to them. Perhaps that’s why Hillary has decided to run for president for the third time in 2020. 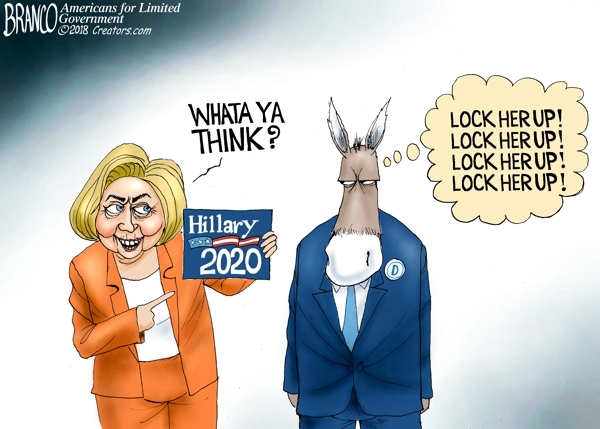 But it’s not that way anymore. In fact, things are so bad for the Clintons they’ve even lost uber-liberal New York Times columnist Maureen Dowd.

In a piece titled, “Curtains for the Clintons,” she described them as “shockingly self-un-aware” of how far off the favorites list they’ve fallen.

“I’m looking around Scotiabank Arena, the home of the Toronto Maple Leafs, and it’s a depressing sight. It’s two-for-the-price-of-one in half the arena. The hockey rink is half curtained off, but even with that, organizers are scrambling at the last minute to cordon off more sections behind thick black curtains, they say due to a lack of sales. I paid $177 weeks in advance. (I passed on the pricey meet-and-greet option.) On the day of the event, some unsold tickets are slashed to single digits,” she wrote.

The Clintons are always going to draw people to their events just so they can actually see and perhaps meet them in person. But obviously, that is a shrinking group of people.

Meanwhile, top Democrat officials and the Left-wing media would really like the Clintons to not go away mad, but rather just go away.

Read more about why Hillary’s 2020 candidacy should make you vote Republican at VoteRepublican.news.

Previous :Humanity is revolting against globalist plot to alter the atmosphere in the name of fighting “climate change”
Next : NYT confirms Elizabeth Warren is 1 part Indian, 99 parts IDIOT for claiming DNA test qualifies her as a “woman of color”
Receive Our Free Email Newsletter