(Natural News) If you get the sense that white Western culture is self-destructing in the U.S. and around the world where it has been dominant for centuries, congratulate yourself for having great instincts.

Various ethnic groups throughout the ages have been singled out for persecution, and in recent history, someone, somewhere decided it was time to persecute Caucasians because it is epidemic these days. Worse, in many cases, those stricken with “white guilt” self-persecute, as though they’ve actually committed some mortal sin just for being born with white skin.

There is no better example of this that what took place in Lyons, France, recently: A French college took it upon itself to “darken” the skin of several students in a group photo as a way of promoting “diversity” to a U.S. market, Infowars reported.

The Emile-Cohl school, which seeks to establish a branch campus in the United States, posted a picture of smiling freshmen students on Twitter. But after some of the students saw it, they themselves “drew attention to the fact that darker skin had been PhotoShopped onto some of their faces, in a few cases making them look like completely different people,” the news site reported.

Check out the outrageous pictures: 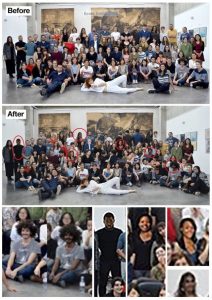 Shortly thereafter, the school began receiving a massive amount of complaints, but rather than own up to its decision, officials pointed fingers at the advertising agency that took the photos – as though an ad agency would take it upon itself to change the features and/or skin color of subjects in photos without the subjects’, or the client’s, permission.

A school spokesman denied “any intention to manipulate reality,” and instead claimed the agency deliberately changed the photos to appear more ‘diverse’ to a U.S. audience. (Related: Conservatives on campus move one step closer to extinction as the intolerant Left drives them OUT.)

“White guilt and self hatred has gotten out of control. This is a mental illness,” wrote one user, Infowars reported.

The alteration of the image creates another dilemma for Democrat-aligned Leftists: “Cultural appropriation,” which is another taboo.

What’s that, you ask? Well, that occurs when a white person attempts to imitate someone of another ethnicity. White people who, say, don a sombrero or wear a Chinese dress, are ‘hijacking’ someone else’s culture and that’s not allowed.

Or they’re mocking it. Or denigrating it. Or doing anything other than attempting to flatter another ethnic group by imitating them (once upon a time imitation was considered ‘the sincerest form of flattery’ – but now, to the Left, it’s an insult).

Meanwhile, any other cultures or ethnic groups can adopt Western, white cultural traditions and norms and be free from Leftist scorn. Hypocritical? You bet. But that’s the game the Left plays; if you’re white you should feel guilty about it and if you don’t, then you’re some sort of ‘-ist’ who engages in various forms of ‘-isms.’

In other words, you can’t and won’t win – so you might as well do as you please.

As for this French school and this skin-darkening stunt, you have to believe that administrators have been plugged into American pop culture for some time in anticipation of opening a school here. And if that’s the case, then obviously they’ve been propagandized and brainwashed by the pop culture Left to believe that the only thing the vast majority of Americans think is important is “diversity.”

It isn’t. In fact, in survey after survey of what Americans really do think is important, “diversity” never makes the list.

You wouldn’t know that if you lived abroad and all you ever watched was the crap content that comes out of our entertainment industry. It’s like being told over and over again about “human-caused climate change” and believing it because that’s the only viewpoint you’ve ever seen or heard.

The Left claims “diversity” is an American strength. The reality is, it never has been and it never will be.

Read more about insanity on American campuses at CampusInsanity.com.