(Natural News) Stunning details from the newly-released IG investigative report — download from the DOJ here — reveal a pattern of treason against the United States of America by James Comey, Peter Strzok and other deep state operatives inside the FBI and DOJ.

Among other bombshell findings, the IG report revealed that FBI agent Peter Strzok actively plotted to “stop” Trump from becoming President. Furthermore, that admission by Strzok was surreptitiously deleted from the texts the FBI previously handed over the Congress, demonstrating yet again that the FBI is engaged in a massive cover-up to hide its own role in committing treason against America. (The FBI, in other words, is engaged in obstruction of justice to cover up its own criminal behavior.)

The report also finds that treasonous deep state actor James Comey used an illegal, secret email account on Gmail to conduct official FBI business, mirroring the criminal actions of Hillary Clinton who violated national security laws by operating her own secret email server. When Congress issued a subpoena for the tens of thousands of emails on Clinton’s server, she ordered them all destroyed. James Comey then covered up for Hillary’s crimes by publicly exonerating her for acts that clearly meet the definition of obstruction of justice.

For his part, Peter Strzok was instrumental in the entire deep state conspiracy to overthrow the 2016 election and carry out a political coup in America, which is a crime of treason. Rep. Trey Gowdy sounded off on the findings today, issuing a press release stating:

[Peter Strzok’s] bias was so pervasive and toxic as to call into question any other investigations he was part of including his role in the investigation of what Russia did in 2016… His bias impacted his decision-making and he assigned to himself the role of stopping the Trump campaign or ending a Trump presidency. The FBI’s actions and those of former director Comey severely damaged the credibility of the investigation, the public’s ability to rely on the results of the investigation, and the very institutions he claims to revere. 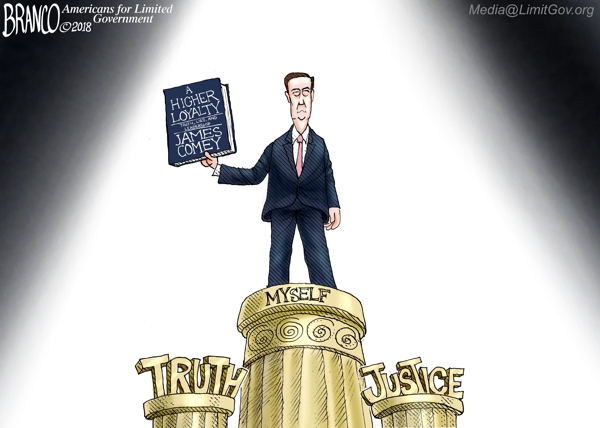 In addition, we’ve also learned that FBI agents traded leaks for free food and tickets to social events, handed out by conspiring members of the corporate-run media. In other words, the media was colluding with the FBI to overthrow the United States of America by bribing FBI agents, who sold out their country for little more than meals and event tickets. (Read FBIcorruption.news to stay informed.) As the IG report states:

[We have] identified numerous FBI employees, at all levels of the organization and with no official reason to be in contact with the media, who were nevertheless in frequent contact with reporters… [FBI agents were] improperly receiving benefits from reporters, including tickets to sporting events, golfing outings, drinks and meals, and admittance to nonpublic social events.

In other words, the FBI was actively committing treason and got caught. James Comey ran the entire operation. Yet to this day, he remains in such a state of denial about the rule of law that he continues to claim he did nothing wrong.

The consequences for treason include the death penalty

While I support everyone’s right to a fair trial and a competent defense, it’s becoming increasingly clear that a long list of individuals inside the FBI and DOJ need to be indicted and charged with treason. If found guilty in a court of law, one of the penalties for treason is the death penalty.

Through their actions, conspirators like James Comey and Peter Strzok have not only proven they are unfit to serve the American people; they are very likely going to face serious criminal indictment for their attempted conspiracy to overthrow the United States of America. Their acts of treason carry severe consequences, and We the People are beyond “fed up” with a two-tiered justice system where crooks in Washington D.C. seem to get away with everything and face no consequences for their crimes. It’s time to hold these people accountable for their failed coup attempt and charge them with the crime they committed: TREASON.

If the FBI and DOJ fail to clean out the deep state operatives who deliberately acted to subvert our democracy and nullify an election of the People, then America will lose any remaining faith in the institution of federal government. This, in turn, will lead to secession, civil war or other extreme outcomes that ultimately spell the end of America as we know it. After all, if the federal government is clearly run by criminals and policed by criminals who exonerate all their deep state buddies from serious crimes, why should the American people believe anything the government does (or says) at all?

We are facing a “do-or-die” moment for the future of this nation. We either hold these deep state criminals accountable for their crimes, or America is lost forever.

Watch my video for full details:

New AG William Barr MUST act against Deep State treason by McCabe and co-conspirators to save our republic
No one is ready for what’s about to happen
Shocking details in IG report reveal James Comey, Peter Strzok and FBI agents plotted TREASON against America
Electoral voters now subjected to brutal wave of death threats and intimidation psyops… “faithless” votes being coerced to throw the election
The next American Civil War begins on January 20… Second Amendment patriots may be called on to defend the Republic against left-wing terrorists