(Natural News) One of the most popular pieces of “evidence” that climate alarmists just love to bring up to prove the global warming narrative is the “all the ice is melting in the Arctic and the polar bears are dying” line. We’ve all seen the documentaries where a polar bear is desperately clinging to a tiny piece of ice and you just know he’s going to die soon. But is any of it really true? What does the latest science really say about the ice in the Arctic circle?

Earlier this month, Climate Depot reported that the latest figures from the National Snow and Ice Data Center, located at the University of Colorado, show that sea ice extent has increased by 40 percent since 2012.

The Danish Polar Portal, which monitors ice and climate in the Arctic, reported on the 12th of September this year:

There has been quite some discussion about Greenland in the climate blogosphere this year. Heavy snow and rain in winter with a relatively short and intermittent summer melt season have left the Greenland ice sheet with more ice than has been usual over the last twenty years – in fact we have to go back to the 1980s and 90s to see a year similar to this one in terms of snow fall and ice melt, though perhaps not for iceberg calving. …

In fact, Greenland experienced a 10 times higher level of surface ice than it did five years ago. And confirming that this is not a fluke occurrence taking place in only one year, Greenland’s most well-known glacier – the Petermann Glacier – has been growing slowly and steadily for the past five years. 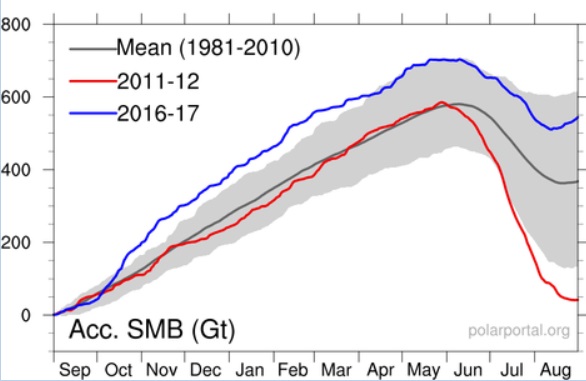 This has been the pattern in the Arctic over the last few years. Back in 2015, BBC News reported that Arctic ice had grown by a staggering 30 percent after what they called an “unusually cool summer” – unusual indeed, if the global warming narrative is to be believed. That trajectory continued into 2014, and the increases in ice for those two years exceeded all recorded losses in the preceding three years.  (Related: Mercury pollution contaminating Arctic wildlife, causing death and reproductive problems among bird populations, studies show.)

That 30 percent constituted a massive amount of physical land area – the Daily Mail reported at the time that a cooler Arctic summer had left over 530,000 additional square miles of ice than the previous year.

Astoundingly, the mainstream media, in spite of having this information at their fingertips, continues to spout the same old global warming nonsense.

In the very same BBC article cited earlier, for example, the writer immediately insisted that “2013 was a one-off” and went on to stress that the Arctic region had warmed more than most other places on Earth over the past three decades. (Related: Discover the truth at ClimateScienceNews.com)

It’s understandable that a trend of continuous heating for 30 years would raise concerns, but by the same token, a continuous cooling trend over the last five years must also be taken into consideration. Scientists are supposed to go where the evidence takes them, not try to keep editing the evidence to fit a predetermined outcome.

It’s like scientists, governments and the mainstream media have all decided that the Earth is warming, and now there’s no turning back. No matter what the physical evidence shows, they’re all just going to save face by insisting that they were right all along.

Previous :5 Everyday items you can use to protect yourself in a dangerous situation
Next : Bionic spider silk: Researchers have developed a super strong “biocomposite” with the potential to revolutionize numerous industries
Receive Our Free Email Newsletter