(Natural News) There’s something to be said about getting out of the way when bad things are headed in your direction. In the same way that you should never stand on the railroad tracks and play chicken with an approaching train, you probably shouldn’t challenge a category-5 hurricane to a game of “who’s the bigger badass.”

Truth be told, Irma is the bigger badass.

Updated storm tracks from the NOAA predict the storm savaging Miami, then barreling its way through Georgia and even Tennessee. Along the way, it’s going to unload outrageous winds on Orlando, Gainesville and possibly even Macon, Georgia. Mass evacuations have been announced and over 650,000 Floridians are currently attempting to flee the state.

Fuel shortages are being reported across Florida, causing some residents to be unable to flee. Via Phys.org:

The only way to drive out of the Florida peninsula is northward, and motorists leaving Miami have found many gas stations cordoned off with yellow tape, signaling they were closed due to lack of fuel.

The State of Florida has even released this color-coded panic chart. If you’re in the purple or red zones, you should probably leave. 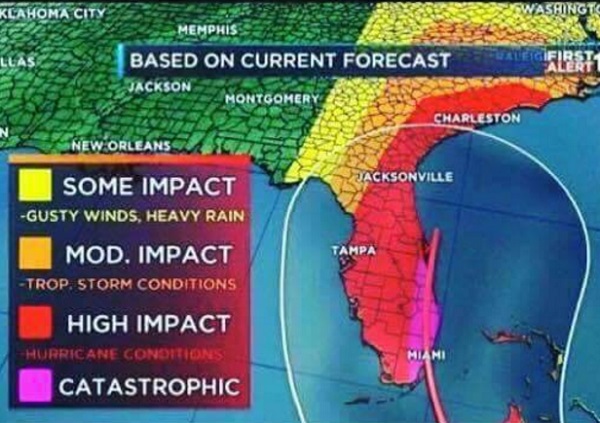 People are beginning to panic

One of the irrefutable truths about preparedness is that the greatest threat comes from the masses of unprepared people who panic. While Hurricane Irma obviously poses a tremendous threat in terms of winds, rain and flooding, it’s panicking people who shoot each other, rob each other, steal your gasoline and loot your home. And it’s lack of preparedness that tends to lead people into panic mode in the first place.

Now we’re learning that the power in parts of Florida could be out for days or weeks. This will only lead to more looting and desperation. According to CNBC:

With Irma set to hit Florida as early as Saturday night, parts of Florida was expected to lose electricity for days, if not longer, and more than 100,000 people may need shelter…

Yet how many people were wise enough to prepare for such a scenario, even with over a week of forewarning? The answer, sadly, is “not many.” Most people just don’t plan ahead. Most people get stuck in the day-to-day “normalcy bias” of thinking that nothing catastrophic could ever happen to them, so they don’t invest in backup generators, emergency water filters, stored fuel supplies, emergency food and other supplies. Most don’t have a bugout plan, a bugout vehicle or even a paper map. So they freak out and add to the burden of problems that impact everyone else. Truly stated, lack of preparedness is the greatest threat in almost any disaster.

The mainstream media only adds to this by routinely mocking preppers and survivalists, as I explain in my podcast:

According to official weather sources, the hurricane track will send it directly into Miami: 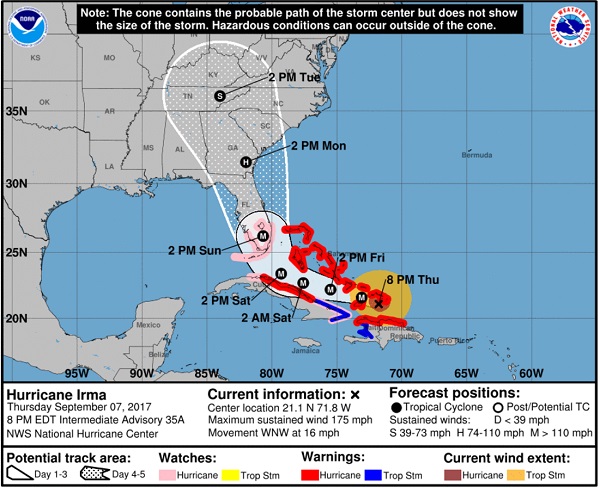 If the eye of the hurricane rips into Miami, it will of course cause tremendous damage and flatten many buildings. The economic damage will be immense, but there shouldn’t be any loss of life unless people fail to heed the warnings and evacuate the area.

Sadly, there will almost certainly be some casualties from the storm as buildings collapse onto citizens. If they had evacuated, of course, they wouldn’t be there when the roof caves in on them. And that’s the lesson in all this: When s##t hits the fan, try not to be standing in front of the fan.

If you’re not into preparedness, you’ll soon be in trouble

You get the idea. Be nimble. Avoid and evade disasters. Have a bugout plan and some portable wealth (i.e. gold coins, etc.). Don’t get seduced by the normalcy of everyday life. Understand that you are living in crazy times and that crazy things are going to happen with increasing frequency. Be prepared for anything to happen, and expect a lot of crazy things to happen without warning.

Here are a few of our sites that can help you stay informed and get prepared:

We also offer a host of preparedness supplies at the Health Ranger Store.

5 Survival essentials for your bug-out vehicle
Long story short: I just walked to Poland.
Ukrainian man describes “hellish” 20-hour walk to Poland amid onslaught of Russian troops
How to survive a cyber attack TAKEDOWN of America
SatPhoneWebinar.com – register now to attend Feb. 3rd educational webinar on how to use satellite phones, how they work and why they are such essential backup communications devices for emergencies and natural disasters
LAWLESS CHAOS: LAPD tells residents to “comply” with robbers as society collapses in blue cities… escape while you still can
Fatal consequences await those who are unprepared for this ‘dead of winter’ TEOTWAWKI scenario
Emergency preparedness: All-season transportation options in a post-SHTF world
Prepping 101: What are the best states to live in during a pandemic?
Survival essentials: 10 C’s of wilderness survival