(Natural News) In yet another science breakthrough for humanity, the U.S. patent office has just awarded patent # US 9526751 B2 for a unique formula called “Cesium Eliminator” which eliminates radioactive cesium isotopes from the human digestive tract where contaminated food and water may have been ingested.

I developed this lifesaving invention, which is also described at CesiumEliminator.com, to save lives in the aftermath of a nuclear accident, nuclear terrorism or nuclear war.

The formula is based on a unique combination of zeolites and dehydrated seaweeds which my laboratory (CWClabs.com) has confirmed to be extremely effective at binding with and eliminating cesium-137 from the human digestive tract.

I’m publicly announcing, right now, that I will donate manufacturing and licensing rights for this invention to any state or national government, anywhere in the world, that wishes to use this technology to protect its citizens from nuclear fallout from any cause. I have also stockpiled 10,000 kg of raw materials for this formula in a warehouse in Texas, and I plan to manufacture and donate this product for free to any victims of nuclear incidents that might take place in the continental United States or in the State of Texas.

Lifesaving invention could help save millions of lives following a nuclear disaster, act of terrorism or act of war

Cesium-137 is radioactive isotope produced from nuclear catastrophes like Chernobyl and Fukushima. It’s also a deadly radioisotope created in the aftermath of nuclear bombs.

Cesium-137 has a half-life of 30 years and it mimics potassium in soils and plants. It contaminates soils for 200 – 300 years, making the land unusable for agriculture. Cesium-137 contamination is the reason why no one lives near Chernobyl to this very day.

Once you eat cesium-137, you are irradiating your body from the inside out.

As the laboratory results chart shows below, this invention eliminates over 95% of cesium elements from the digestive tract, making it extremely effective at protecting the body from absorbing radioactive cesium.

Why is this important? When people drink radioactive water or eat radioactive food, Cesium Eliminator can capture up to 95% of the radioactive cesium elements in food and water before it gets absorbed into the blood stream and gets deposited in soft tissues throughout the body: 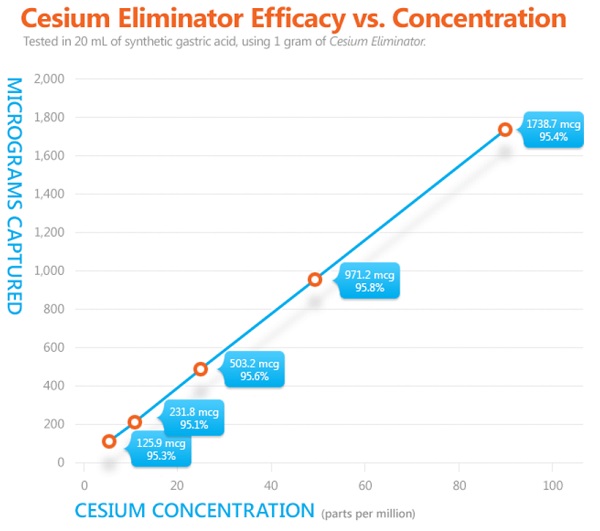 According to the U.S. Centers for Disease Control:

Even the New York Times, which is often reluctant to report any legitimate scientific truth on topics like vaccine ingredients, acknowledges the harm caused by radioactive cesium-137:

Over the long term, the big threat to human health is cesium-137, which has a half-life of 30 years. The radiation from cesium-137 can throw cellular machinery out of order, including the chromosomes, leading to an increased risk of cancer.

Iodine does not block radioactive cesium

Many people are purchasing iodine products such as potassium iodide or nascent iodine as a defense against radiation. But few people know the truth about iodine: It does NOT block radioactive cesium.

Iodine protects primarily just one organ: your thyroid. And it protects your thyroid from just one radioactive isotope: Iodine-131, which has a half-life of around 7 days.

Iodine does nothing to protect you from radioactive cesium. Iodine, in fact, has no ability whatsoever to block, capture or bind with cesium isotopes. (Iodine binds well with calcium and potassium, however.)

Unfortunately, the over-marketing of iodine for radiation protection has misled many people into thinking they are “bulletproof” against radiation if they take iodine. This is blatantly false.

The best protection comes from covering all routes of exposure to ionizing radiation: air, food, water and direct exposure to radioactive sources (such as fuel rods).

Accordingly, all those preparing against nuclear catastrophe should protect themselves from all radioactive isotopes, including iodine-131 and cesium-137.

Cesium Eliminator is NOT currently for sale to the public, but we can manufacture it in quantity for state and national governments

Importantly, Cesium Eliminator, the dietary supplement formula based on my U.S. patent, is not currently for sale to the public. Because the primary ingredient of the formula — Zeolites — always contains high levels of aluminum, we are withholding direct sales to the public. This is because we do not want people taking the product as a “vitamin” or a routine supplement. It isn’t a vitamin at all. It’s an emergency use dietary elimination technology that binds with and helps your body eliminate radioactive elements, and it’s only appropriate to be consumed in a dire emergency involving the release of radioactive elements.

(In a pinch, for anyone who wants to take advantage of this discovery in a real emergency, you can simply consume zeolites, knowing that you’ll also be consuming large quantities of aluminum at the same time. But in the race of aluminum vs. cesium-137, it’s far more important to eliminate the cesium.)

We are, however, available to manufacture the product in bulk for emergency response authorities, local governments, state governments and national governments, including those outside the United States.

Our manufacturing facility is located in Texas and is certified organic, state certified for food handling safety, and operates in full compliance with ISO, FDA and USDA requirements. (We are FDA GMP compliant as well.) This product can be manufactured as either a powder or a capsule. Our laboratory facility is ISO-17025 accredited, which is the highest analytical laboratory accreditation status available, with international recognition.

Remember, too, that as part of my humanitarian science mission to protect lives, I am offering to freely donate manufacturing rights of this patented supplement to governments in the United States and around the world. Contact me to initiate technical discussions if you represent a government organization that might benefit from this patented, scientifically validated technology.

Previous :Why every new generation is just another mindless herd that gets financially obliterated by another stock market bubble collapse
Next : FAKE SCIENCE on parade as exact opposite news headlines appear right next to each other, citing the exact same study
Receive Our Free Email Newsletter