(Natural News) In a Communist China-style crackdown on free speech, Google has launched a PURGE to take down sites supportive of President Trump.

Yesterday, the entire NaturalNews.com website was delisted by Google, removing 140,000+ pages of content covering disease prevention, nutritional therapies, scientific investigations into environmental contamination, dangers of prescription medications and more. The internet is in an uproar over the obvious assault on free speech, with Natural News coverage of the Google censorship going wildly viral on social media, radio interviews and article coverage across the independent media.

Natural News was targeted, we believe, because we not only publicly predicted President Trump’s victory well before it happened, we also openly support Trump’s policies to protect America, drain the swamp and restore the Republic. (We are also the publisher of Trump.news.)

Now, Natural News has learned that the take down of NaturalNews.com is just the opening salvo of a massive free speech purge from Google to silence pro-Trump voices across the ‘net. After my announcement yesterday that described Google’s outrageous censorship of Natural News, I have been contacted by several other site owners who say they were also taken offline at about the same time.

The following graphic from IsMyWebsitePenalized.com shows that 470 websites have been penalized or banned by Google in the last month: 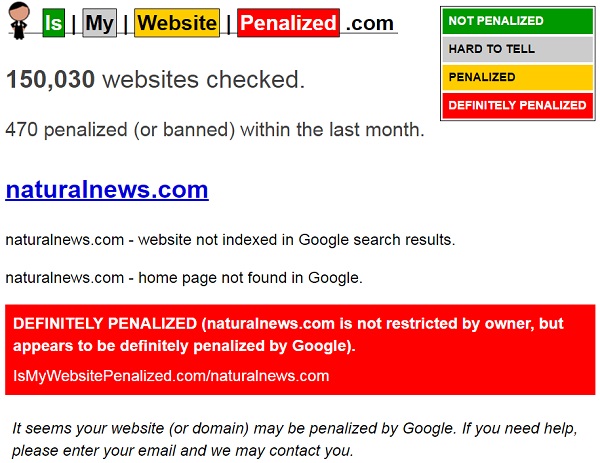 No doubt many of those 470 sites deserved to be taken down due to malicious code or malware infections, but as the following screen shot from the Google Search Console reveals, there are no security issues affecting the Natural News website: 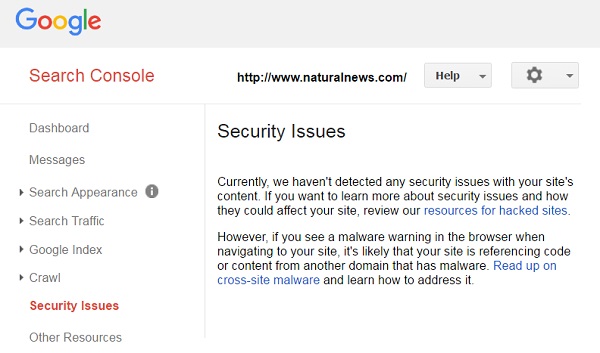 Instead, Natural News has been banned via a “human decision” that has no justification whatsoever and was issued without warning or recourse. In effect, somebody at Google flat out decided they didn’t like Natural News content, and they flipped a switch to “memory hole” the entire website in an instant, much like detonating high explosives to take down building 7, come to think of it.

This is on top of the economic sabotage committed against InfoWars on Tuesday, where the Google-influenced advertising company AdRoll cut off InfoWars’ ads without warning, costing InfoWars a reported $3 million in annual revenues.

Two days before that, Breitbart News was targeted with a malicious take down of Milo Yiannopoulos, thanks to video leaks coordinated by George Soros-linked front groups.

A prelude to a massive false flag or coup attempt against President Trump?

Why would Google go to such great lengths to engage in outright censorship and economic sabotage against two of the largest independent media publishers in the world, in back-to-back censorship action that almost screams “urgency!”?

The answer is obvious. Something big is about to be initiated against Trump, and the largest pro-Trump voices are being systematically silenced, one by one, to make sure no independent media can counter the official narrative that will be pushed by the fake news media (CNN, WashPo, NYT, etc.)

This is fascism on display as corporations are now carrying out the bidding of the deep state that’s planning to cause mass mayhem or death in order to remove Trump from power before he can go public with the truth about the pedophilia links to prominent D.C. politicians.

Click here for my Health Ranger Report podcast that explains more, or watch below: