(Natural News) When Big Government goes off the rails, it’s almost like they’re smoking crack. In this case, that’s not far from the truth: The Albuquerque Police Department now plans to manufacture crack cocaine so they can sell it to people who are then arrested for “possession of crack.” (See court documents below for proof.)

Wait a sec… Crack cocaine is an illegal substance, right? So now the police are going to possess it, manufacture it, sell it and then arrest citizens who buy it from them?

Yep. That’s how some police tell themselves they are the “good guys” when they manufacture crack cocaine to sell to the “bad guys” who were making the crack cocaine before the police started making it.

In other words, the Albuquerque Police Department will now be engaged in the manufacture and distribution of Schedule I Controlled Substances, meaning it is no longer deniable that “the cops are the drug dealers.”

It’s now right out in the open.

See the documents obtained by BurqueMedia

The story first broke on BurqueMedia.com, which explains, “An affidavit obtained by Burque Media from a confidential source spells out plans by the Albuquerque Police Department to go after low-level drug users in a reverse buy-bust operation. In a reverse buy-bust, undercover agents sell drugs to citizens, and then arrest them for possession.  Part of that operation involves APD manufacturing crack cocaine from powdered cocaine.”

Just as I was writing this story for Natural News, the “Affidavit and Motion to Release Evidence” document was removed from Scribd. But we have screen shots below, grabbed before the document was memory holed.

…the State of New Mexico, through its Assistant District Attorney and Affiant Detective Marc Clingenpeel, and hereby request this Court’s order to allow detectives to obtain heroin, methamphetamines, cocaine base (commonly referred to as crack), and/or cocaine from the Alburquerque Police Department’s Evidence Unit for the purpose of an undercover operation as set below in quantities listed in order

…powered cocaine may be taken into APD’s Criminalistics Unit to be made into crack cocaine.

…The Alburquerque Police Department’s Narcotics Unit will use the heroin, methamphetamine, crack cocaine and/or cocaine… to sell to individuals who are seeking to purchase drugs within the City of Alburquerque.

Article continues below these documents (scroll down to keep reading): 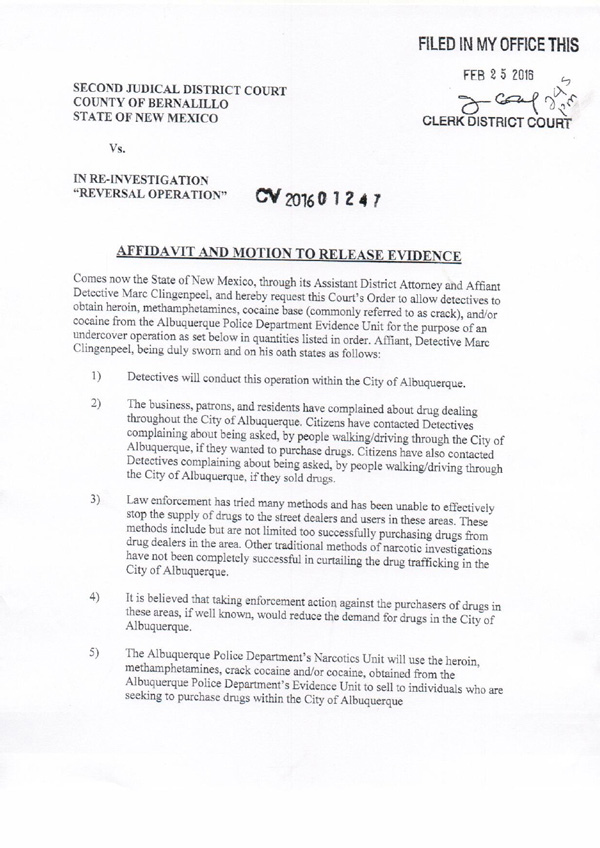 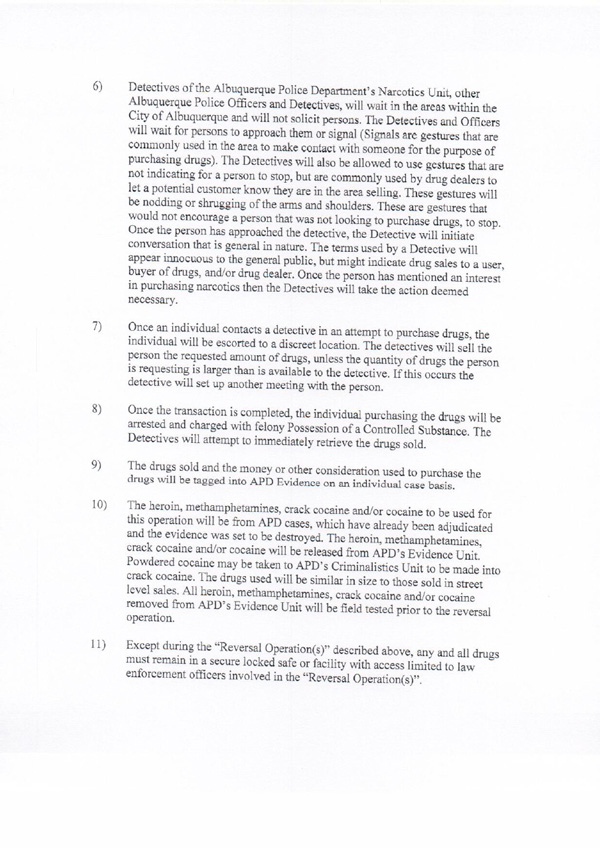 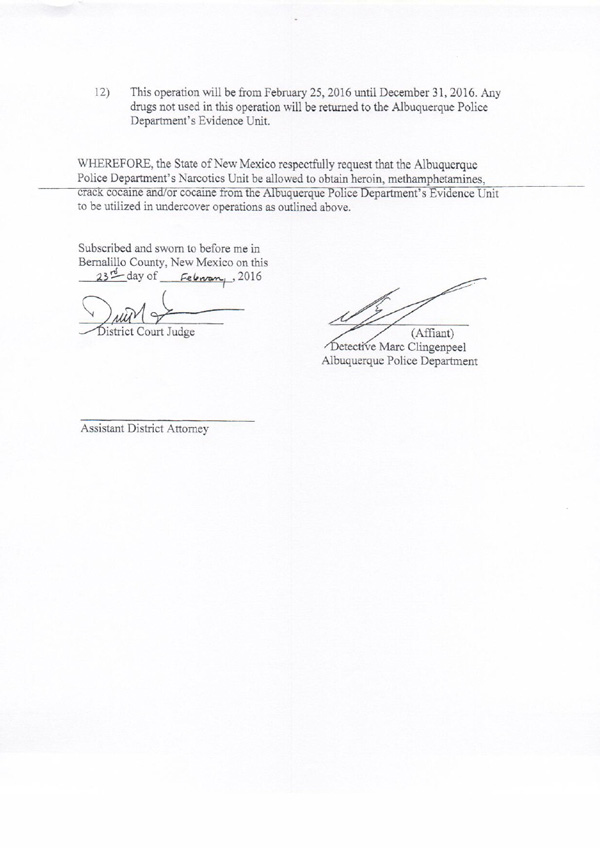 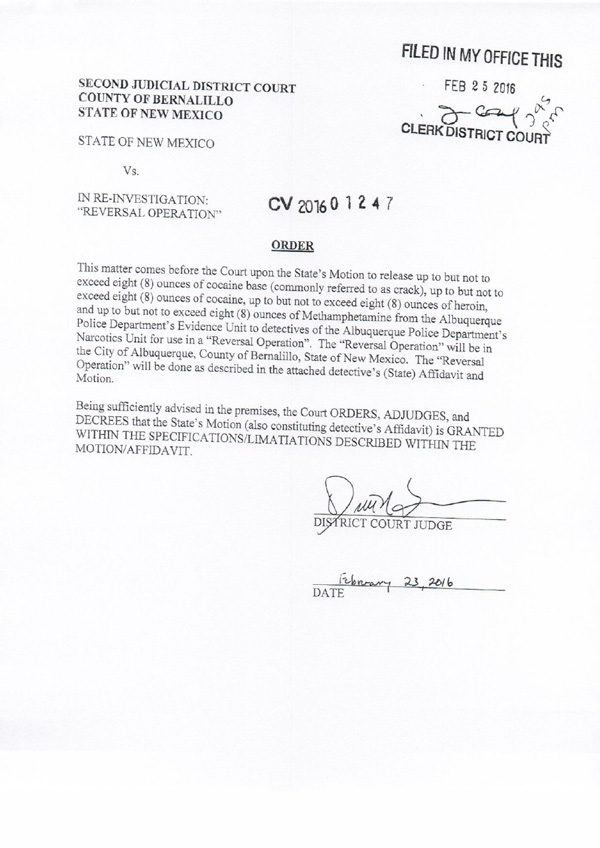 As part of the APD’s manufacture and distribution of crack cocaine, they’re planning on ensnaring citizens by using what they call “gestures that are commonly used in the area to make contact with someone for the purpose of purchasing drugs.” These gestures include nodding and shrugging the shoulders, meaning if you simply nod at one of these undercover APD crack dealers, you could be just moments away from being arrested and charged with attempting to purchase crack.

After a nod or shoulder shrug, “the person will be escorted to a discreet location,” says the document. “The detectives will sell the person the requested amount of drugs,” it explains, after which the person will be “arrested and charged with felony Possession of a Controlled Substance.”

You mean the same substance the police just manufactured and sold them?

Gosh, and during what part of this elaborate operation do the detectives just pocket the cash and let a few buyers walk? Oops! Looks like a few kilos of crack never made it back to the evidence locker… strange how that happens.

When cops become drug manufacturers and street dealers, something has gone terribly wrong with the failed “War on Drugs”

Now, you see, the police are making the drugs, dealing the drugs and potentially profiting from the drugs. It won’t be long before the APD finds it needs to plug a “revenue shortfall” with some extra cash. And what do you know… hundreds of citizens are lining up just to hand them cash for their self-manufactured crack cocaine!

The temptation for abuse in this racket is too juicy to ignore. When a detective can make more untraceable cash profit in a single week than they might pull in an entire year on the city’s payroll, it’s not difficult to imagine some of these cops going “freelance.”

And if you have a police-run operation that can manufacture crack cocaine, sell it to people on the street, then arrest those people for buying the very same “illegal substance” the police department is manufacturing, just how long will it be before fringe police departments start running sex slave rings in order to “sell” slaves to buyers who are promptly arrested? (Hint: This is already going on. The cover-up is intense because the “customers” of such activities often tend to be among the political elite.)

What can you do about all this? For starters, don’t buy crack cocaine. More importantly, if you live in Albuquerque, don’t nod or shrug at anybody on the street, or you may find yourself dragged into a dark alley by undercover cops who claim you “signaled” them with an intent to purchase illegal drugs. If they persist, just tell them you aren’t interested in cocaine… you were actually hoping to buy a good time and you thought the undercover cops were transgender prostitutes. That should work amazingly well. Try it yourself and see!

Previous :Electoral voter death threats backfire: Hillary Clinton loses four, Donald Trump wins in an electoral landslide
Next : If you’ve stopped prepping, it could be the biggest mistake of your life
Receive Our Free Email Newsletter

Over 5,000 arrested since July under Trump administration’s anti-violent crime initiative, Operation Legend
Trump sending federal agents to more cities to fight violent crime
Albuquerque Police Department to start manufacturing crack cocaine so they can arrest the people they sell it to