(Natural News) Food and water were once considered to be basic rights, belonging to the individual. Sadly, this is no longer the case. The rights to food and water have been sold off to the highest bidder, commercialized and turned into an indutry. Some might call it the bane of our health and wellness, others just call it Big Food. Big Food only sells us their food-like products at prices that make profits.

Perhaps if this industry was comprised of many small businesses, it wouldn’t be so bad. But, at least in Western society, almost all of the food and beverages we buy are owned and operated by just a handful of companies. Oxfam, an international confederation of charitable organizations focused on the alleviation of global poverty, has created an infographic that illustrates how a small number of corporations have a monopoly on grocery store shelves. 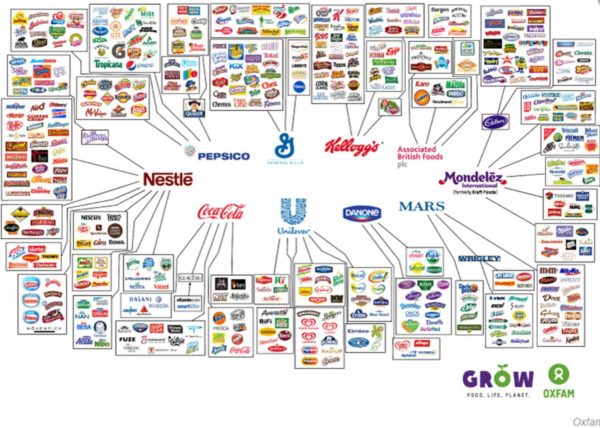 A mere ten companies have managed to usurp control of many popular foodstuffs and beverages. This includes Nestlé, PepsiCo, Coca-Cola, Unilever, Danone, General Mills, Kellogg’s, Mars, Associated British Foods and Mondelez. Each and every one of these companies makes billions of dollars each year in revenue, and have spread their presence across the globe.

Oxfam has said that it took action and showed people who is controlling the brands of food and beverages that they purchase as a way to hopefully push the companies into making positive changes within their countries of operation. While this is important, the presence of such extreme monopolization in our food industry is also very concerning for a number of reasons.

Monopoly power comes with many drawbacks — except of course, for whoever is at the helm of the monopoly. When companies have extremely concentrated power like this, they hike up prices well beyond what can be justified based on production costs — prices that are higher than they would be if they had any kind of actual competition. And with higher prices, consumers will demand less quantity.  This, in turn, means that the quantity of a product being produced and consumed will be lower than it would be under a more competitive market structure. To put it simply, monopolies create prices that are far too high, and reduce production levels far too much. Product quality is also often an issue.

The tactics used to establish and maintain a monopoly are often unsavory, as well. Driving competitors out of business or ruining the efforts of potential new players in the market place can also cause considerable harm to those who own the small businesses that are inevitably forced to close their doors. As an example, a larger company with plenty of resources may drop their prices drastically for a short period of time to regain control of the market place, and force their smaller competitors to close up shop.

Of course, the consequences of monopolies aren’t just limited to the effects they can have on the economy. You see, large monopolies are also capable of yielding political influence. They are also often able to “capture” poltical and regulatory processes. Large firms may use their influence and financial power to sway legal and regulatory processes in their favor, or against any potential threat to its market power. Industries that have been monopolozied also utilize their newfound power to bring about changes that widen their profit margins.

For example, over the last three years, Nestle has spent $11 million lobbying Congress in an effort to gain control of the water and cocoa trades. Most of these lobbying efforts have been spent trying to prohibit increased regulation in these industries, among others. Nestle Waters North America has “donated” directly to 16 different representatives and 8 senators, with spending split fairly evenly between political parties. Reports show that they are targeting members of key congressional committees, which isn’t all that surprising. Earlier this year, Nestle somehow managed to maintain their right to bottle water in the drought-stricken state of California, following a federal judge’s ruling. The company’s permit, granted by the National Forest Service, expired in 1988.

Monopolies sure do have a way with ensuring rules don’t apply to them, don’t they?