(NaturalNews) It’s important to point out the outrageous hypocrisy of the shameless murder of Harambe the gorilla, a conscious, aware, intelligent being who showed no intention of trying to harm the child that fell into his exhibit at the Cincinnati zoo. #JusticeForHarambeThe very same stupid, idiotic humans who carry out these murders to “save a child’s life” will turn right around and have their own children injected with brain damaging mercury in the form of vaccines. They’ll feed their children cancer causing chemicals like sodium nitrite in bacon, sausage and hot dogs. They’ll routinely commit chemical violenceagainst their own children at every meal, yet when a gorilla is near some child, it’s so scary to ignorant humans that they haul off and murder the primate out of nothing but ignorant fear.

(Natural News) Humans are stupid. Harambe is no villain, and he didn’t deserve to die.

The murder of Harambe exposes the total idiocy, violence and destruction of a doomed human race

This tragedy is the perfect reflection of the total idiocy of the human race. An entire race of “advanced” humans systematically poisons its own children every single day in the form of vaccines and autism… yet when a gorilla shows no such threat whatsoever, the gorilla is murdered in cold blood “just in case.” And for what? To save a human who will most likely grow up as another indoctrinated cog in the machine of obedient consumerism… another toilet flusher and junk food face stuffer who, statistically speaking, stands a near-zero chance of making any meaningful contribution to humanity’s future.

And now that this child has been “saved,” he will no doubt have to visit numerous psychiatrists for all the “trauma” he’s experienced, and he’ll be put on multiple psychiatric drugs, most of which eventually cause some form of mental illness, including tendencies toward violence and suicide. So by committing violence against the gorilla, humankind has saved a human child only to subject him to the chemical violence of Big Pharma. How is this a better outcome?

Like most Natural News readers, I reacted in utter shock and horror at the senseless killing of Harambe the gorilla. I thought about this issue for almost two days before commenting on it, because I wanted to really touch base with what I was truly feeling on this issue. And now it has become crystal clear: This act of violence against Harambe showcases everything that’s wrong with humanity, a suicidal race of violent killers who systematically destroy all other life on the planet by claiming such actions are necessary to “protect us.”

The violence that Harambe might have committed against this young boy is nothing compared to the chemical violence that is ACTUALLY committed against children like him every single day. There’s chemical violence in the medical industry, the vaccine industry and the food industry. Children are dying from cancer that was fed to them by agricultural giants who spray the crops with deadly weed killers like glyphosate. Yet the clueless, indoctrinated public has been trained to ignore all that violence being committed against children and focus instead on the physical “monsters” that look big, black and scary. IT’S A GORILLA! SHOOT IT!

Pardon my language, but I say “F— those stupid people.” If you want to stop violence against children in America, stop the CDC. Stop the vaccine industry’s criminal racket and mass chemical cover-up. Stop the mass poisoning of our food with cancer causing chemicals. Stop the real monsters of our world like Monsanto, Syngenta, DuPont and Bayer. If you want to really save children from violence and death, stop Pfizer, Merck and Eli Lilly. Stop the HPV vaccine, for God’s sake, which maims and murders young girls by the thousands every year.

Gorillas aren’t the monsters committing violence against our children. It’s the food companies, the pharmaceutical companies, the psych drug doctors and the cancer industry.

Leave the apes, chimpanzees and gorillas alone. Stop capturing them for human entertainment in the form of zoos. Shut down the zoos and set the animals free. Stop enslaving intelligent, conscious beings for the pathetic entertainment of clueless humans who are so stupid, they’re poisoning their own children every single day. (Gorillas don’t poison their children, by the way. They’re too smart for that…)

Stop teaching children that animals are obedient creatures to be contained and controlled for entertainment purposes. If you want to teach a child about the real world, take them camping in an actual forest somewhere. Go on a (non-hunting) safari sightseeing tour. Move to the country and raise some ranch animals. Give those kids some hands-on experience taking care of real animals living in the real world.

Zoos are artificial constructs… theatrical institutions of mass deception that trick parents and children alike into falsely thinking that wild animals are obedient, controlled “petting zoo” creatures. In reality, they’re just slaves of the system — slaves that are put on display for the entertainment of stupid humans.

And if you’re ready to take all this one level deeper down the rabbit hole, consider this: YOU are an animal in a zoo, too. We’re all enslaved by the system. Everything you think you own is actually owned by the system (property taxes, death taxes, imminent domain, etc.). You are no more free to act on your own than Harambe the gorilla. And if you get out of line, they’ll gun you down just like they gunned him down.

After all, if you don’t bow down and worship vaccines, then you might be a threat to children too, see? That alone is justification enough to put a bullet through your heart, just like they did Harambe… 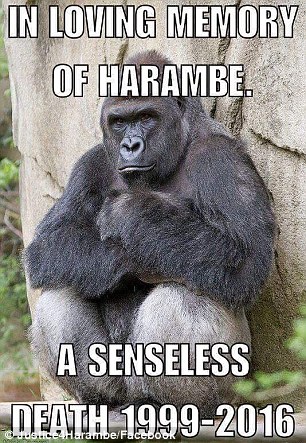