(Natural News) After receiving an ominous email from a New York Times journalist that stated “Twitter is likely to take enforcement action on Ms. Greene’s account,” Congresswoman Marjorie Taylor Greene has questioned whether the tech giant and mainstream media outlet are coordinating on news stories about account suspensions.

In the email, the reported said that the New York Times is “looking at” one of Greene’s tweets and that Greene’s account would likely face enforcement action for “coronavirus misinformation.”

They added that the New York Times had been totting up the total strikes on Greene’s Twitter account and informed her that she now has “one more strike to go before potentially being permanently suspended from the platform.” 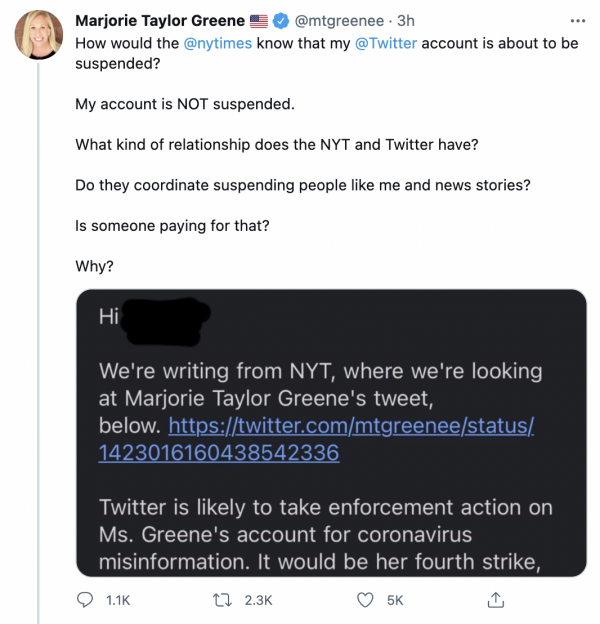 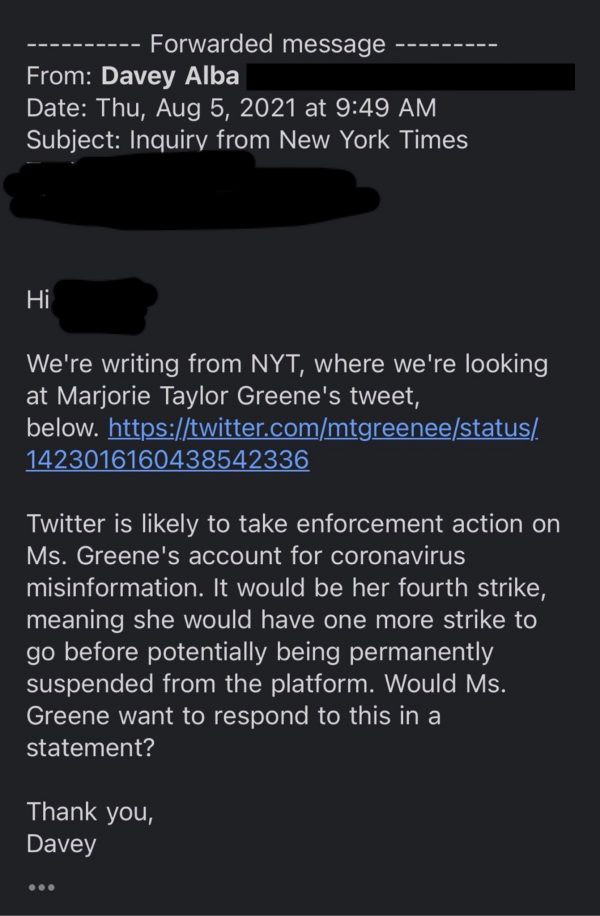 In the tweet that the New York Times flagged for alleged coronavirus misinformation, Greene called for an end to vaccine mandates and said she had “talked to multiple women who say they miscarried healthy pregnancies after taking the #COVID19 vaccine…not only miscarriages, but also reporting blood clots and heavy & irregular periods after taking the Experimental Use Covid vaccine.” 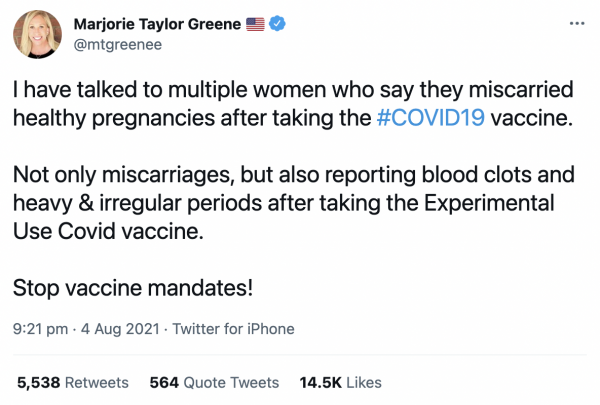 While the phenomenon of content being censored and accounts being suspended by Big Tech after mainstream media complaints is becoming increasingly frequent, Greene found it odd that the NYT had suggested her account would likely face enforcement action before it had actually happened.

“How would the @nytimes know that my @Twitter account is about to be suspended?” Greene tweeted. “My account is NOT suspended. What kind of relationship does the NYT and Twitter have? Do they coordinate suspending people like me and news stories? Is someone paying for that? Why?”

This New York Times flagging of Greene’s tweet comes just a couple of weeks after she was locked out of her account for 12 hours after she said COVID isn’t dangerous for those who aren’t obese and who are under 65. She has been censored by Twitter multiple times, both before and after she was elected to Congress.

Greene is one of several public figures and brands to be accused of spreading “misinformation” or “false” information by the New York Times.

The New York Times previously claimed that satire site The Babylon Bee “frequently trafficked in misinformation” before it walked back the claims and issued a correction after being threatened with legal action.

As Babylon Bee CEO Seth Dillon noted when his site was branded as misinformation by the New York Times, these types of accusations from influential media outlets increase the risk of Big Tech taking enforcement action against those who are targeted.

Facebook admits in court that its “fact checkers” are just truth censors
12 worst cases of Big Tech censorship in 2021
Rumble severs business ties with Unruly Group and Tremor International (TRMR)
How Wikipedia changed me from being a good guy into an evil person
Dr. Oz, now a Republican candidate for the Pennsylvania Senate, is getting censored on Facebook after criticizing “Lord Fauci”
Climate change propagandist Michael Mann calls for total censorship of anyone who disagrees with him (op-ed)
Twitter now protecting pedophiles, child traffickers and corrupt Democrat politicians by selectively banning “transparency” channels
FDA ordered Google to remove covid videos from YouTube because agency didn’t like their message
New Twitter CEO bans the sharing of any photos and videos “without consent” as censorship worsens at platform
Facebook changed its hate speech detector algorithm after finding nine of 10 instances involved anti-white hatred